It was in far north of Delhi, as far as Rohini sector 3 at ‘Mother Divine School’ and from Indirapuram, Ghaziabad where I stay, I had to first go to Paschim Vihar to drop my 3.5 year old daughter and 19 year old niece in the safe custody of my in-laws (Joke time – Outlaws are Wanted) but if that is what, that be it and it took me close to 2 hours to do all of this.

Driving through the Darya Ganj, Jawahar Lal Nehru Marg ,watching the tonga-wallahs and leaving NDLS before you take the Paharganj flyover and meandering through ladder neon signs of hotels is a good fun on a Sunday since the market is closed. Rohtak road has still a lot of character left which is so difficult to find in new-age super-shiny-surfaces with routine signs and all that.

It is never hard to find what you are looking for in Delhi as long as you do not shy asking around. As we entered ‘Mother Divine School’ in Sector 3, Rohini, we took a good sweeping look and were pleasantly surprised to see a real large number of kids looking fwd to be next sensation.

There are kids who have come from as far as Jhansi for their pie of fortune, some kids really sounded well but were rejected and a couple was taken just to get some entertainment factor in the initial rounds. 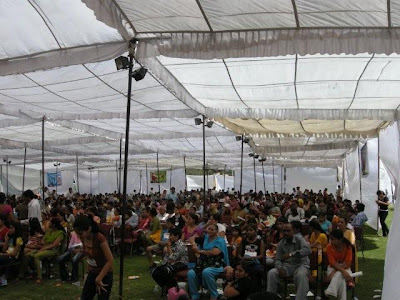 We moved towards the registration kiosks and after the usual pleasantries, were ushered in an ‘Audition Room’. I was there for about an hour or may be 45 minutes. 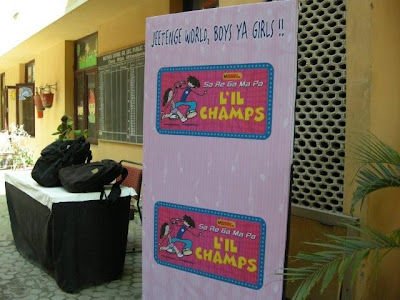 While sitting there, there was more than one instance when you have 3 cm dia goose bumps and you say, Voila but then judges have a different opinion. Later when I was a part of a bigger conversation with few people around, including Ashish Golwalkar (apparently the boss of the program from ‘content’ side and my motivation to be there, old friend) I realized that there are kids who would memorize few songs so well that you do not know whether its the play of a good gala-n-sur or just plain mugging. So while someone may sound super to you for few songs, they may not make the cut.

Then there was a single lady who wanted to make her kid do well and tell her husband that she can bring up a kid better, can’t blame the mother entirely but not sure whether the 8 year old kid understood all of this.

Here’s a video of a promising chap called ‘Ankit’. He started with a Sufi and did very well. Later he took out a 4 times folded notebook sheet where he has written the ‘scale’ information of the songs he has prepared :).

The food was at Metro Walk, Pind Balluchi. @ 135 a mojito it sounded like a steal but it tasted more like Shikanji, a detailed review on that later.

Picked a carton of KF pints, Picked the dropped ones from P Vihar, picked a mutton-keema potion from Anand Restaurant (from the bylanes of CP), picked the weekly quota of Classic Verve and Regular for the clan and polished it with a saada paan (At Rs 6, its the best you can get) from Bengali Sweets, I was home before it was too dark and in time to not miss our cook.

So far so good.