E-commerce is finally growing big in India or so it seems. Flipkart recently got another round of funding, about USD 160 Million and just a few month back investors had already committed USD 200 million dollar. Of course everyone knows about MMT and how they have scaled up, gobbling tons of bookings every second. So far everyone was bullish on travel-ecommerce and it was the only sector, which was getting all the investor’s attention, but over last 2-3 years so there is now a flood or e-commerce companies providing from daily groceries to high value smart phones. So when I was contacted by Cashkaro folks to write a story on how I would spend INR 10,000 it was an easy decision to spend all of that online from the comforts of my big window office.

The flexibility which one gets via online shopping is something which is almost impossibly for brick and mortar shops to match and then on top of it when you have access to services like cashkaro, it is a bonus. Cashkaro helps you to make cash while you shop and you can shop your favorite brands since cashkaro is a service built on top existing commerce platform.

So let me do some shopping now. I have been looking for a good phone for my father, a decent Android based phone which is not hard on pocket but has a big screen and would allow him to check emails, be on Facebook and whatsapp as well as get through household chores around bill payments, ticket bookings etc.

My first choice is Samsung and I find a brilliant deal – http://cashkaro.com/stores/samsung-galaxy-grand-duos-available-from-homeshop18. A Samsung Galaxy for about INR 18000 + a cash back of about 1%. I like the phone but probably I am looking for sub 15000 phone and the cash back is also not exciting.

So easy decision. I did spend more than 10,000 but I am happy with my decision.

I did find time to browse the site and it indeed has a rich collection of deals from all the major players of ecommerce. One interesting thing I noticed was this offer on hotel bookings done from booking.com

Now, as recent as this summer we booked our hotels in Brussels, Edinburgh, and York from Booking.com since you mostly get a complete refund if the plans do not materialize. Now for a 10 night stay, at an average price of GBP 100, it comes to be GBP 1000. At 3% cash back, that is GBP 30 or INR 3000. I could have bought a nice Hidesign passport holder for that price, so do not ignore this exciting service and do give a try.

The above is part of a blogging request though I eagerly wait for the day when one can get discounts on Apple devices.

A close friend after many rounds of spirited conversation asked for an advice. I am now old enough to realize that I, for that matter a lot of us, do not deserve to be asked for an advice. But turning down a request, that too from a close friend is a very impolite behavior. Add to it the series of dark sweet rum that had further mellowed me down so I tabled my offer that I would be very thoughtful and would try to do as best as I can, after I dutifully and patiently listen to his case.
Not that he needed me to do all this, to really put his case but it often helps.

As I began to listen to his calm rendition of the problem statement, I could see myself talking through him, for a moment it seemed as if the Satan is asking me this question through him and I need to solve it (or resolve it) myself. I pinched myself to check whether I had more Rum than necessary. May be, I am going with some kind of visualization disorder but it was not as bad. After surveying, discreetly, I fell back on my drama skills to ensure that I am signed-in. I didn’t need to read and listen this question too well because it was as much true to my situation as him. It could have been a reverse case as well where the narrator becomes the protagonist. He carried on, ensuring that he gives me enough context, which I never needed, ensuring that he doesn’t hurry up, which I never needed, ensuring that he throws enough pauses so that I can assimilate, which I never needed. My mind started to work out the response and I completely tuned out.

By the time he finished, I had meticulously thought of a brilliant response, almost akin to a standing ovation piece. With growing confidence, I was in no hurry to let my secret beans out, I knew before hand that I have got something in my arsenal which can not be challenged. So with a great display of serene and insightful state, I quietly continued to finish more Rum while my over active mind was iteratively going through the response and was refining it with each round. I had done almost 5 rehearsals before I got a chance to put my performance and boy what a performance it was.

With great articulation, in a single stroke of mastery, I spit out words of wisdom one after the another. After winning him by a brilliant demonstration of philosophical garbage, I paraphrased the fundamental value of life and how one needs to get out of situation like these by focusing on basic things around relationships and so on. In no time, I concluded my great gyan and we were out of the mess.

The truth is that whatever I said is what I believe ideally one can do (including myself) but those were not at all practical day-to-day suggestions that could really make a real difference (w/ or w/o the dark sweet drink). If it was so easy, I would have solved it (or resolved it) myself.

I still think that my response makes a lot of sense but I have not been able to live them myself. Instead, Should you just tell your friends that , dude I am in the same boat.

There was a time when I used to stay with friends , who were my colleagues in my previous company. Jogi, an old college friend, came back to Delhi and was with Zee. Since Zee was in Noida and we were in Noida, we had many evenings together.

He would steal an hour or two from his evening shift work, drop by, have a glass of beer and go back. Incidentally he would talk very little during that time because he would enter singing, sing-drink-sing, and exit singing.

Here’s a MP3 of his work, old recording from a live concert. . 🙂

He is now in Dubai and i miss his songs.

Most of the beer in India have non-twistable or non-screw caps which means that you need a bottle opener to open them. While this may sound perfectly logical and right way to do, you would find a lot of (esp of American origin) beer pints in America which can be just opened using hand by twisting the cap. You open them the way you open a half-a-litre Coke Pet Bottle.

Recently I found something which I have not seen so far here so thought that I would write a small blog. Well, I found a pint which has a cap which can be pulled off. The beer is called, Tuborg and for the pint (dont know about the full regular bottle) you do not a bottle opener. You simply pull it, the way you open a Coke or a Beer Tin, and it pops out. Happy.

Let me click some pics and show you, how it looks.

Here I am. The first two are the ones when its bottled. 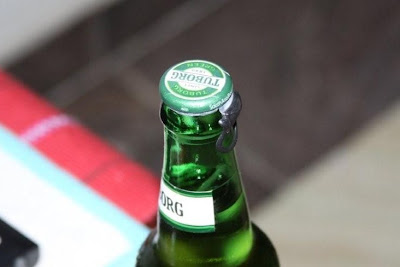 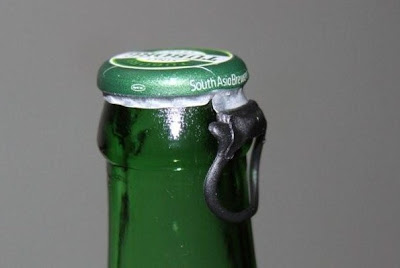 And here’s when its gone. 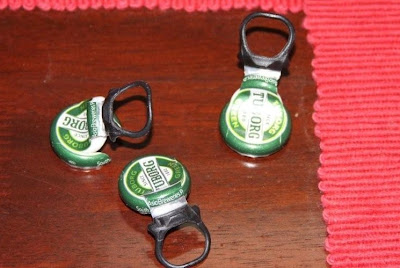 hope you like this information and by the way, I was saving the caps to shoot them some day and write this blog, the ones where the cap is intact are getting chilled for the evening.

I bumped into this last week and I thought I would share this with you. A cute funny video of two kids.

There is lot of talk about this video on the internet. UGC (User Generated Content) was the backbone of Web 2.0 (with podcasting, blogging, review and commenting, rating and what not) and a video with millions of views probably validates that.

Watch it since its cute. Very cute.