I went to Doon couple of weeks back and we had planned to do a night at Dhanolti. We had a bad experience and I thought I would share it here.

We have booked a tent at ‘Camp Woods’ which is run/managed by Wanderlust. This was the first time, we have planned to stay at a property of ‘Wanderlust’ and probably it would be the last time. The camp was sold to us as a wonderful place with a swiss tent and all those things. We were asked full advance (Rs 3800 for two people for a night) and even for a swiss tent, it was quite a premium. We spoke to one called Uma at their Delhi office.

Initially we were refused as there was no place but surprisingly when I e-mailed them, they readily agreed. We were told to pay the full money in advance. It was something which should have alerted me and we really paid the price for that lapse.

So we reached there and what we really saw was a small piece of land, next to road having some tents. The tents were not swiss ones as they didn’t have the attached loo and were not as big as what the standard swiss tents are. It was all vacant and spooky. There were three punters who claimed to be the ones who would provide services. From a distance, we could guess it that we have been taken for a ride. The tents were not swiss and at best they looked like a concoction built to survive a traveling-camping group. The infra was really poor. Not that I haven’t been to such place but I have never paid through my nose for this kind of infrastructure. When I confronted with the guy at the camp who was more like a poor-chap who works for 2K a month and handles the cheated travlers, he really had nothing to say. He had no phone (only BSNL phone work so our phone was not working) and there was no office. We were promised that we will get the invoice at the camp and as you could have guessed it, the guys there had nothing like that. If not for that worn-out board at the road which has the name of the camp, the place could be called anything w/o any change, say ‘The great Dhanulti Camp’ or whatever. They were surprised when we told them that we were supposed to get an invoice 🙂 They genuinely were. 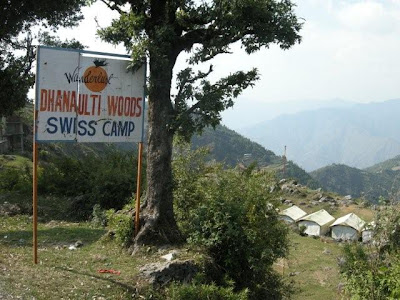 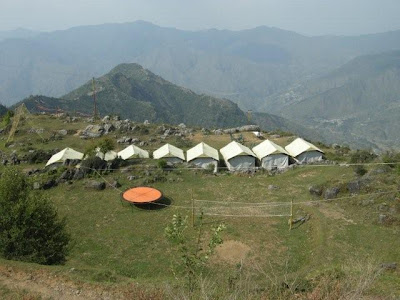 Row of tents. There is nothing else there and its not child safe. 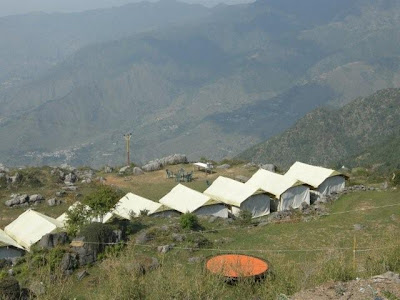 It looks good in photo, as long as you dont get cheated for the price.

We went back to Doon and stayed there. We called them from Dhanaulti and told them to refund our money. Even after repeated calls and follow-ups, I am still to get the refund and I hope that they realize their mistake and I dont have to resort to legal ways 🙂 which I am fully prepared to , if need be. It was really amusing to hear back from Uma and Anuj (someone at Wanderlust) that its our fault since we were looking for a luxury holiday and tents are not like that. May be next time, I book something I should go with my log of travels. I didn’t even feel like responding to these remarks 🙂

I know some of you must be thinking that why dont I write this at www.ghumakkar.com and alert other ghumakkars. I thought about it and I was so pissed off by this experience (they actually ruined a vacation) that I didn’t want to spread that.

Still I am writing it here, just to vent. If you do go, then negotiate hard, from my camping experience, those were not more then 1000 Rs including meals. Infact if you can drive about 20 KMs further, there is this camp called ‘Whispering Pines’ (there is another one with the same name but thats more like a hotel, this is true-blue campers place) where you can get one for a night at Rs 600- Rs 800. And mind you, we were in off-season 🙂 It was all empty, not sure whether other people did the same thing as what we did.

So AVOID Wanderlust. I waited for four weeks to write all this and probably if they would have apologized and returned my money by now, I might have not done this.

So Avoid them and dont ruin your much earned vacation.