The big tome was gifted to my wife by someone about 3 years back. I think it came in 2005 and I finally picked it up from the top shelf of my wall clinging shelf-mesh-cum-library last month. Its 900+ pages and I am not a big fan of such heavy books, being a lazy reader I often take few life-times to finish one but of all the gambles I have taken in picking fat books (including ‘Zen and the art..’) I have been always able to finish.

So I finished this a while back and waited for couple of weeks to settle my oozed-out wonder-stuck eyes, gives some rest to my often-excited lower left pump and sort of let-it-sink before I attempt to write a quick review. Often the initial excitement dies down to a more informed insight and time makes you better.

My overall rating for the book is 5/5, after a long time. The last one I guess was ‘The Kite Runner’. Here’s a short scoop 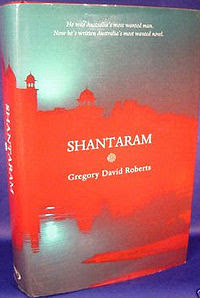 Its based on Robert’s own life in Mumbai, an Australian fugitive who is on a run and finds Mumbai interesting enough to hang-on. Its not an auto-biography but its a fact based fiction , now that sounds like a lawyer-lingo. Well, the protagonist is the author himself and he goes through his life in Mumbai as an expat, as a slum-dweller, as a mafia and finally finding himself amid Mujahideens. The plot is brilliant and characters are juicy and full and David ensures that the narration is engaging, novel but at the same time full with thrill.

The book is a Philosophical fiction by someone who takes us into those areas where a bulk of us have no access viz. Jhoparpatthis (slums), Black Markets / Mafia, Jails, Drugs and what not. Its a great read for academic purposes since it deals with today’s world and while it would have its own share of writer’s creativity , the details around Arthur Road Jail, Durgs, Cold Turkey are something which doesn’t look far from reality. And mind you, the book is not about the main character, Lindsay aka Lin Baba aka Lin Bhai but it gives equal justice to all the others and doesn’t make it into a self soul-search saga. Too many things happen all the time and all the characters go through a lot of transformations, in the end it almost reads like a suspense thriller where you would want to know, what would happen now.

There is a plan to make a movie where Johnny Depp is going to play the lead role, directed by Mira. The latest plan for release is 2011. For more than few times, I felt like doing a movie playing Lin and after some deliberation with myself, I settled for Nazeer.

Here’s the wiki link and there is also a official website here.

Shantaram is the 2nd of a quartret which David has planned but I dont think other 3 ever made it or made it so far.

The book is also greatly recommended for folks who are looking beyond thrilling-engaging-edgy reads, some of the lines are exceptional.

I know with 900+ pages, it may sound thick but read it for ‘Character Building’ and one which you would enjoy unlike the traditional ‘Character Building’ activities. If you read the book, I would be delighted to read your views about the book in the comments section. I am hoping that if you chose to read this after my recommendation, I didn’t let you down.

I just finished ‘Outliers’ by Malcom Gladwell and that review should happen shortly.